Addis Ababa, November 17, 2018 – It was just three years before the great Ethiopian Run first staged, the war between the two sisterly countries of Ethiopia and Eritrea broke out. But fast backward to the clock to six months ago, the ‘no war no peace, but tensed situation’ following the boarder war that claims hundreds of thousands of life’s from both countries is now being made history.

Following the change of leadership in Ethiopia’s politics at the beginning of this  March, direct conversations begun between heads of the states of the two countries after two decades. boarders were opened for the free movement of the two brotherly peoples after its blockades for that given  period of time. While the direct flights from Addis Ababa to Asmara and the vice versa also had begun meanwhile trades are now booming specially at the boarder areas of the two countries.

The reason behind for the very first time visit to Ethiopia by an Eritrean Athlete  Zeresenay Tadesse, a household name for the world of athletics, world’s half marathon race specialist and one of the greatest long distance athletes of the post millennium era, as special guest of honour to the Total great Ethiopian run is, non other than,  because of this peaceful agreement between the two countries.

The great Ethiopian run, Africa’s biggest annual 10km road race, which boasts 44,000 mass participants and more than 500 elite athletes, where the first hundreds, can guarantee a sub-30 minutes finish, from Ethiopia, Kenya, Uganda, Botswana and for the first time in the race’s 18 years of history, also from Eritrea who will also welcome  Zeresenay Tadesse and Uganda’s Olympic and World Marathon Gold Medallist Stephen Kiprotich, as special guest of honours for this year’s race, will be held this Sunday, November 18, 2018 around Sidist Killo Martyr’s monument, North Western Addis Ababa

Zeresenay, believed that for the two countries with such a similarities, staying separate for only political reasons were unnecessary. But, he is now feeling beyond happy about the current political situation, he is happy to see the people of these two countries with same language, culture, religion and lifestyle make an agreement that will correct the wrong deeds in the past. He also expressed his happiness to be in Ethiopia for the first time.

Asked about if he had a wish to compete in the competition, his answer was very clear, he said, ” Yes! I wished to be part of it, because the great Ethiopian run is such a grand race, Eventhough I am a guest of honour this time, my feeling is, as if I am taking part in the actual race.”  He also expressed that, he have a long term plan to organize such kinds of races in Asmara, Eritrea.

There are some growing thoughts of seeing  both Ethiopian and Eritrean Athletes competing as one team in Tokyo 2020 Olympic like Team GB does in the Olympics. Zeresenay Responded to these claims, “where there is peace there is everything, first lets continue enjoying the love and unity we are having right now, and there is also another way of collaborations, such as, athletes can make their trainings together whether in Ethiopia or Eritrea, we can even help each other in the competitions.”

Peoples of the two sisterly countries are now enjoying a political, economical and social rewards of the peaceful environment that surfaced in the area after all those years of disintegration.

Running for a Cause

Aim As part of its Corporate Social Responsibility, Great Ethiopian Run raises funding under the umbrella campaign named “Running for A Cause” using the popularity 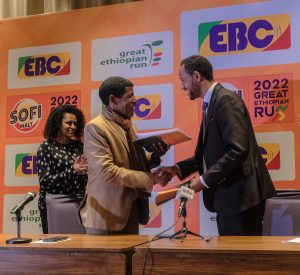