Selemon Barega, 19, born in Guraghe Zone, Southern Ethiopia, is a promising long-distance athlete who has achieved so many triumphs at an early age; which includes, becoming a World and African U20 Champion in 5000m, a world U18 Champion in 3000m, a Diamond League Winner in 5000m by clocking 12:43.02 which is, a U20 World record time.

Selemon, a national team regular and South Police Athletics Club member, who is also a police Inspector, probably the youngest ever to reach to this rank at his age, is an athlete who seems to have all what it takes to control the world under his feet, due to his swift rise to success, his industrious energy, dedication, and consistency. However, it took a lot from him, to be where he is today. He has to win over his families to become an athlete and to inspire others in his area.

He used to practice football as a kid, but he thinks that he will befit as a successful businessperson had he not become an athlete. Many thanks to his friendly approach, it makes it easy for us to know him more, about who he is and what are his aspirations are.

He always feels indebted to those good people, who have their fair share of contributions to his success in athletics. He says he could not mention them all even if he wanted too, because there are too many virtuous people around him from the beginning to this date, who were supporting him in unwavering condition. However, he always has a special place for teacher Mekedes, who were his Physical Education teacher during his time at primary school. A teacher who persuaded him to trade his footballing interest to athletics by made him join her newly established athletics project in the school. Because she knew that, he has all it takes to reach the level he is today before anyone else does.

All these big names in athletics mentioned above are Selemon’s biggest inspiration in athletics. “I learned a lot from all of them. The tactics, the endurance, the speed, the persistence, I have got something from each of them for my running. Not only that, but I am also their biggest fan as an athlete and growing up wishing to be like them. My future target is also, to be as successful as they do.” Selemon said.

Perhaps the only critic about Selemon, by the athletics experts is his poor management of competitions. He has almost competed week in week out for the last couple of years. This is probably the only reason that he did not break the world records or won at the World Championships in London, considering his potential according to these experts.

“A lot of people, including Haile Gebrselassie, advised me to properly manage my competitions, which is a fair comment and its one of the aspects I did a huge improvement lately,” Selemon said.

Selemon’s athletics future looks very blurred due to the continuous extinction of his beloved 5000 and 10000meters track races from the global sphere. He said that “My long term goal as at rack athlete was to break both the 5000 and 10000meters World Records, but due to the new changes made by IAAF regarding these events, I am not even sure if I am going to stay as a track athlete for any longer. I am not yet able to decide about my future career, I am still in darkness, thinking about if I have to move for road races at this young age or going to 1500meters on the track, the fact is, neither of them is my primary choices at this very moment. Therefore I am asking IAAF to stand for athletics and protect the interests of long-distance track athletes before anything else and to bring back the good old days of these competitions.”

HIS CHANCES OF WINNING AT DOHA 2019

Team Ethiopia is under intense preparations for Doha 2019 World Championships for almost a month. Selemon is not only one of the team embers but one of the prodigies to bring the glory days back to Ethiopia in both long-distance track events. “I have learned from my mistakes in London two years ago, I am in a very good psychological and physical form to the championships.” He said. However, he is also aware that the victory is up for grab for anyone who works very hard and a bit lucky during the event.

ABOUT HIS DESIRE TO MEET WITH CRISTIANO RONALDO

Solomon’s first affection for sport is football. He loved to play and watch it all day long. He is a diehard fan of Manchester United FC and Cristiano Ronaldo. His love for the Portuguese makes him travel more than an hour to go to a sports bar just to watch him play and support his team while he was a kid.

“I have to go far away from home; despite I get back very late, just to watch him play.” He told me. I was asking him if he had a chance to meet him personally, his answer is “no”. I ask him again, do you still want to meet him? He said, “Yes! I would really love to meet him”. Then, I offer him a bet, which he gladly accepted it. …I will tell you more about the bet when the right time comes. 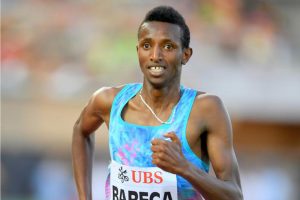