Twenty-four-year old Abe Gashaw became the first athlete to win three titles by taking victory in the 22nd edition of Addis Ababa’s international 10km, adding to his wins in November 2016 and January 2021. He won in a time of 28 minutes and 32 seconds, edging out Hailemariam Amare (28:34) and last year’s winner Gemechu Dida (28:36).

But the women’s race produced a new race winner in the shape of Tigist Ketema who is better known as a track runner with a 1500m PB of 4:00:71. Ketema bided her time until the final kilometre before unleashing her sprint for home, pulling clear of 2nd placed Mestawot Fikir and 3rd placed Foyten Tesfay in the final 200m.

For Gashaw his win was redemption after the disappointment of dropping out from the Venice Marathon three weeks after being tripped at the 30km point. Following the race in Italy, he returned home and took a week to recover before committing to the race here

He and Dida were always visible at the front of the race, with Gashaw leading up the hill past the National Palace at the 6.5km point and Gemechu trying to break clear on the downhill section into Kazanchis before the race’s final kilometre.

With 600m to go as the finish Hailemariam Amare who won two golds at 3000m SC and 5000m at this year’s African Championships moved into the lead. But, claiming afterwards that he thought that the start line came 1500m earlier, he mistimed his run for home and was overtaken by Gashaw in the race’s final few metres.

The highest-placed non-Ethiopian was Keneth Kiprop of Uganda who finished 16th in a time of 29 minutes and 26 seconds.

In the women’s race Ketema saw off the challenge of the more fancied names by waiting until the final kilometre to sprint clear of the field.

The early pace had been set by Tesesema Abshiro-coached Meseret Gola who has a best time of 2 hours and 20 minutes and 50 seconds from the Seville Marathon earlier this year.

Gola ended up in 4th place, just two seconds down on Tesfay who was running here for her fourth time.

A total of 41,000 participants had registered for today’s race, thus returning the event to its pre-pandemic size. As has been the practice of the past three years the mass race went off as a wave start just ten minutes after the start of the elite races with runners wearing green, yellow and red t-shirts, the colours of the Ethiopian flag.

Both the country’s president Her Excellency Sahle-Work Zewde and the Addis Ababa City Mayor Adanech Abebie were present for the start of the race. 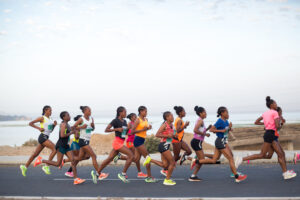 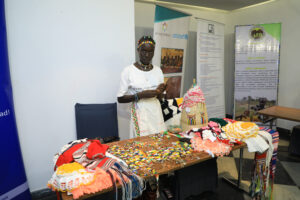 During the campaign, 1.1 million Birr was collected in various ways. 5 January, 2023: Great Ethiopian Run, in its Running for a Cause campaign, held