(3, April 2019) Addis Ababa, Ethiopia, one of the great annual sporting events in Addis for children soon to take place. The delegation of the European Union to Ethiopia and the Great Ethiopian Run proudly announce that they will jointly organize the 2019 edition of the traditional Europe Day Children Races on Sunday 5 Ma. More than 2,700 boys and girls under 5, 8, 11 and 14 will compete in a 2km race at the National Youth Sport Academy to celebrate Europe Day, and the strong friendship between Ethiopia and the European Union.

Europe Day, held on 9 May every year, celebrates peace and unity in Europe. The date marks the anniversary of the historical ‘Schuman declaration’ a speech that set out a new form of political cooperation in Europe, which would make war between
Europe’s nations unthinkable. The EU Delegation to the African Union is also part of the celebration of the Europe Week by organizing Afro-European Music Residency and Africa Europe Creatives Connect. The events consist of a concert at National Theatre on May and Creatives workshop on May 10.

Beyond physical well-being, sports can play an important role for a safer, more prosperous and more peaceful society, through its educational values and thee worldwide attention it generally receives. Sports help bridging cultural and
ethnic divides, create jobs and businesses, and, most of all, promote tolerance and non-discrimination, reinforce social integration.

Ambassador Johan Borgstam, Head of the European Union Delegation to Ethiopia said: “I’m sure that among the children competing May 5 in the Europe Day Races we will have some of tomorrows’ champions. Perhaps the next Haile G/Selassie or Tirunesh Dibaba will be there! The EU Delegation is particularly proud to sponsor this event in a country famous for its world class runners. The partnership with the Great Ethiopian Run is important since running touches the lives of people from all walks of life, regardless of differences in gender, age language or cultural differences. We also know that sports can play a key role in tackling social exclusion.”

Ermias Ayele, General Manager of The Great Ethiopian Run said: “We are very happy we could organize children races annually with the EU Delegation in Ethiopia. A young age is where talent is nurtured and the winners are rewarded encouraging them to practice more, there are not many events for children in the country also and this closes that gap and we stage it at the very safe compound of the Ethiopian Youth Sport Academy”

To announce the EU Week Celebration a Press conference will be held by Ambassador Johan Borgstam and Ambassador Ranieri Sabatucci EU heads of Delegation to Ethiopia and the African Union respectively at the European Union Delegation to Ethiopia (Cape Verde Road in front of Desalegn Hotel) on Wednesday 3 April at 11 :00 am; followed by a Q&A session

Ethiopia has been a key partner for the European Union, with a long-standing partnership dating back over 40 years. In 2016, the EU and Ethiopia signed a “Strategic Engagement”, committing both sides to close cooperation in areas ranging from regional peace and security, to trade and investment, and including migration and forced displacement. Read more on: https://eeas.europa.eu/sites/eeas/files/factsheeteu ethiopia.pdf 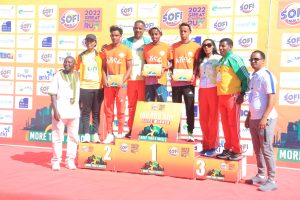